Role of fatty acids in the body

During their absorption, lipids are mainly oxidized to provide energy to the body. Lipids also have an important functional role as the main components of cell membranes. In addition to the functioning of the cell, membrane fatty acids are also precursors of molecules involved in different signalling pathways in the body, such as the synthesis of new fatty acids, insulin sensitivity or inflammation modulation.
Thus, fatty acids, particularly those consumed by food, have an important biological role and can influence health and well-being.

The chemistry of fatty acids

Linoleic acid is the most important omega 6 fatty acid in the human diet. It is an essential fatty acid, and humans cannot synthesize it, so it must be provided by food. As plants produce it, seeds, nuts and oils of vegetable origin contain many of it.
Once ingested, linoleic acid is a precursor to the body’s synthesis of other unsaturated fatty acids with longer chains, such as arachidonic acid.
In addition to being formed from linoleic acid, arachidonic acid is one of the most common fatty acids in the modern diet (products of animal origin such as meat or eggs).

Human cell membranes contain a high proportion of linoleic and arachidonic acids. Omega 6 is therefore important for the proper functioning of the body. Linoleic acid is an important component of ceramides (cement molecules that ensure cohesion between skin cells) and thus prevents dehydration. Arachidonic acid has an important role in the cognitive development of children, but also in the proper functioning of the brain throughout life.
Arachidonic acid also serves as a precursor to the synthesis of molecules called eicosanoids involved in the regulation of some biological signalling pathways such as inflammation, immune response or blood coagulation.

One of the major health benefits of linoleic acid is to reduce bad cholesterol levels in the blood (LDL) when this fatty acid is consumed as a replacement for some saturated fatty acids. Thus it reduces the risk of developing cardiovascular disease.
The status of arachidonic acid is not so clearly defined. As the main precursor of eicosanoids, it is associated with increased cardiovascular disease and inflammation in some studies, while others have shown protective effects.

The main omega-3 fatty acid found in human nutrition is alpha-linolenic acid. This fatty acid is essential just like linoleic acid (omega 6).
Omega 3 fatty acids are synthesized by plants and are mainly found in green vegetable tissues, as well as in seeds, nuts and vegetable oils in modest quantities.
Alpha-linolenic acid is metabolized in the body to omega 3 fatty acids with longer chains such as eicosapentaenoic acid (EPA) or dodecahexaenoic acid (DHA). These two very long chain omega 3 fatty acids are also found in the diet mainly in fatty fish (salmon, sardines, tuna…) and seafood, and also in food supplements based on algae or microalgae.

Cell membranes contain little alpha-linolenic acid but mainly contain EPA and DHA, especially the cell membranes of brain and eyes. EPA and DHA are also precursors to the synthesis of pro-resolving mediators with anti-inflammatory activities.

EPA and DHA have a very important role in the brain and visual development of children, as well as in maintaining their proper functioning throughout life.
Through the synthesis of pro-resolving mediators, the consumption of omega 3 fatty acids reduces blood pressure and inflammation markers, thus reducing the risk of developing cardiovascular diseases.

The balance of the dietary supply of omega 6 and omega 3 fatty acids is important.
As described in the two previous paragraphs, the two essential dietary fatty acids linoleic acid (omega 6) and alpha-linolenic acid (omega 3) are transformed in the body into arachidonic acid (omega 6, which is responsible for the synthesis of eicosanoid derivatives rather pro-inflammatory) and EPA/DHA (omega 3, which is responsible for the synthesis of pro-resolving anti-inflammatory mediators) respectively.
The transformation of omega 3 and omega 6 in the body uses the same enzymatic pathways. Thus there is direct competition for the metabolization of omega 6 and omega 3 fatty acids.
In current Western diets, the ratio of omega 6 to omega 3 intake is 15:1, whereas it should be around 4:1.4 Thus, the proportion of omega 6 metabolized is predominant compared to omega 3, which leads to the synthesis of more pro-inflammatory than anti-inflammatory compounds in the body.
Increasing the consumption of omega 3 fatty acids and restoring a balanced omega 6/omega 3 ratio helps to maintain good health and prevent cardiovascular disease.

Oleic acid is a monounsaturated omega 9 fatty acid and is the most predominant dietary fatty acid. It is very widespread in many foods, whether they are derived from plants (vegetable oils) or animals (butter, bacon etc.). Olive oil contains about 70% oleic acid.
Many cell membranes contain significant proportions of oleic acid.

In addition to those consumed, there are saturated fatty acids in the body that are de novo synthesized by the body. Many cell membranes are composed of saturated fatty acids, mainly palmitic and stearic acid. They are therefore important for the proper functioning of the cells.

Trans fatty acids are mono or polyunsaturated fatty acids whose double bond position has been transformed naturally or industrially.
This transformation of cis double bonds into trans can occur naturally when the oils are cooked at too high temperatures, or in the stomachs of ruminants via the action of specific bacteria. This transformation is also carried out industrially and makes it possible to stabilize the oils by solidifying them and reducing their risk of oxidation. 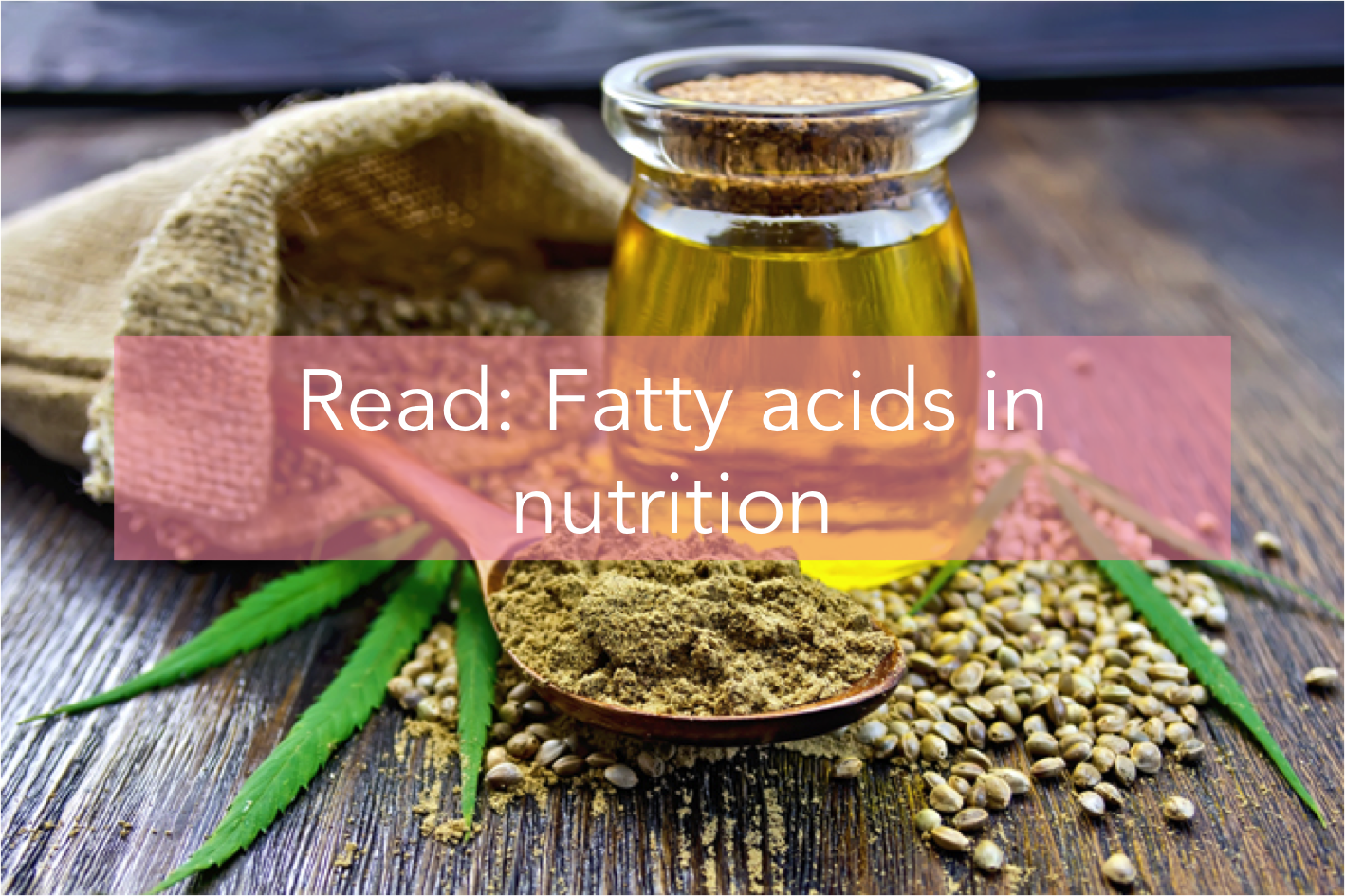